My uni classmates and I have what I shall call “differing opinions” on literature, and this week’s review – or rather, first impressions – is no exception. Why a first impressions? Because “Blood Meridian” is the first book for the course that I’ve failed to finish reading. 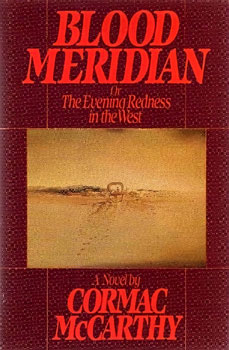 However, I will admit that when it comes to this book, I’m left scratching my head. I can say with certainty that I don’t like it as a writer or as a reader. McCarthy is a skilled wordsmith: his descriptions of landscape are gorgeous and of murder and violence stomach-churning. But his intense disdain for punctuation, including speech marks, leaves me gnashing my teeth with frustration. It makes the book look ugly to me.

And as a reader… well. The reason I haven’t attempted to summarise the plot yet is because to be honest, I don’t really know what’s going on. I’m about half way through the book and my awareness of where we are in space, time and character is fuzzy to say the least.

I know we’re somewhere in Mexico. I know we’re with a gang of mostly Americans, including the judge, a sinister, hairless sadist of a man. I know our protagonist is ostensibly the kid, who is about fourteen and who ran away from home and ended up joining this gang. And I know that what the gang is doing is running around Mexico and murdering the natives to scalp them and claim bounties.

Where exactly are we? I’m not entirely sure. Why are these people doing all these things? To get rich, I suppose. Why do they want to get rich? I have no idea. Who are they? Equally mysterious. The kid is never given a name and we know nothing about him. He’s barely a character, let alone a lead.

Everything in “Blood Meridian” seems scientifically designed to keep me at arms length. The awkward lack of punctuation, the long sentences, the refusal of the narrative to allow access to the characters’ thoughts: all of these things are alienating. And while it feels to me that McCarthy is deliberately trying to engineer this feeling, it’s not one that appeals to me as a reader.

Don’t get me wrong: I’m not objecting to the graphic violence, although it is frequent and could be extremely upsetting for some readers. I’ve read Darren Shan’s “Demonata” series. But those books are first person and allow us to become intimately acquainted with those characters, which helps to ground me in the story.

I don’t have that with the kid or Toadvine or the judge or anybody in “Blood Meridian”. I’m left adrift, floating over the desert like a cloud of dust, watching these men run around doing terrible things without really comprehending why.

McCarthy is a good writer. But with its violence soon losing its ability to shock as it becomes commonplace and the lack of literary anchor, “Blood Meridian” is not to my tastes.