Two weeks ago, I claimed that I had to read “Heart of Darkness” as my next uni book. Turns out I got that wrong: what I was meant to have read was this week’s review subject, “Disgrace” by J.M. Coetzee. This book won not only the Booker Prize, but also the Nobel Prize for Literature. 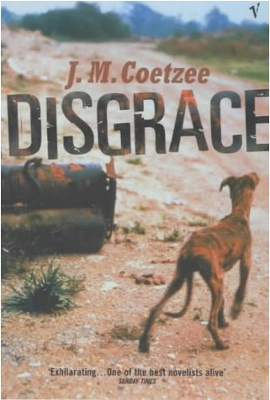 And I hated it.

Actually, no. Hate is too strong a word. Hate implies that I feel in some way passionate about this book, and I don’t. All I feel is cold loathing and distaste for it.

Once again, I must emphasise that this is a book with beautiful writing and Coetzee is a talented wordsmith. Once again, the problem for me is the story and especially the main character, David Lurie.

Lurie is the antithesis of everything I want in a protagonist: dispassionate, unimaginative, incurious and detestable. This is a man who finds that his entire life becomes formless when he can’t attend weekly visits with his favourite prostitute. He is that dull and uncreative.

Not only that, but he’s controlling and abusive. At the beginning of the book, he visits a prostitute weekly, but after he sees her in her civilian identity with her children, she stops being a prostitute. So what does our protagonist do? He tracks down her real name and home phone number so he can call her in her own home.

And that’s just the beginning. His relationship with one of his students, an eighteen-year-old girl called Melanie, is a textbook abuse of power. Not only that, but at one point, he initiates sexual contact with her and continues despite her saying “No” several times, which the text describes as “not quite rape”.

I don’t know whether that’s a character thought or Coetzee’s opinion. Either way, no. Melanie said “No” and never said “Yes”. That is not “nearly” rape. That is rape. Period.

What’s more, Lurie’s lesbian daughter Lucy is gang-raped by a group of black men for two reasons: because Coetzee wanted to make a point about the punishment of whites post-Apartheid, and to develop Lurie as a character. And that is wrong.

Using the rape of a woman – and in particular, a lesbian woman – to motivate a male character is a tired and sickening cliché. We never get inside Melanie and Lucy’s heads. We never get to see how their assaults affect them internally. We never get their stories.

All we get is a tiresome middle-aged university professor with dreams of creating a significant work of art, who doesn’t care about anything that happens to him or how his actions impact on everyone else.

In short, I spent two hundred odd pages in the company of a man who is racist, sexist, careless and cruel, and I didn’t enjoy a single minute of it.

It just goes to show: it doesn’t matter how well written a book’s prose is or how deep and meaningful its political commentary may be if your protagonist is irredeemably loathsome.

One response to “The Thursday Review: “Disgrace” by J.M. Coetzee”